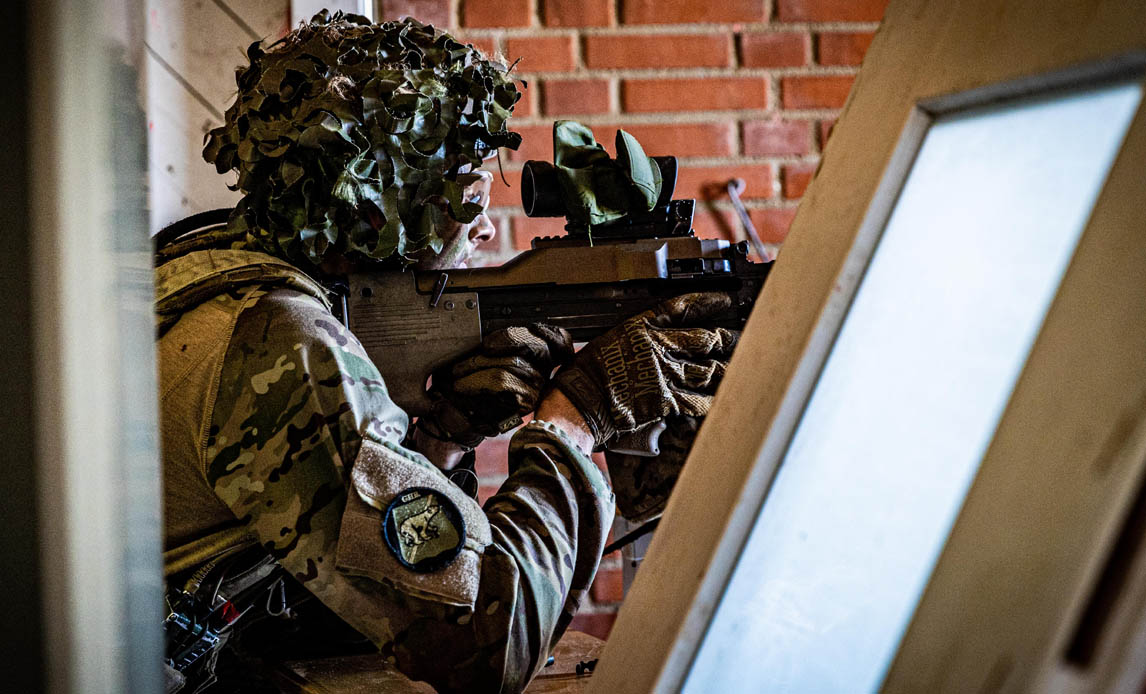 Denmark is ready to send a combat battalion of 800 troops to reinforce Latvia, Danish Prime Minister Mette Frederiksen said while visiting the Danish continent of 200 troops in Tapa in neighbouring Estonia on 31 March.

Featured photo: One of the soldiers of the Danish battalion training for deployment in May
(Photo by Tue Skal/Forsvaret)

The Danish battalion has been training over a little more than a month now, being regrouped from various locations in Denmark to Slagelse – working towards a possible deployment under NATO command in light of the Russian attempt to take Ukraine.

In Latvia they expect the Danish troops to arrive in Ādaži in April, after the parliament in Copenhagen has formerly given the green light. The battalion’s core force lies within an armoured infantry and a mechanized infantry company.

Once the Danes are in place the NATO’s Canadian-led multinational brigade in Latvia will be 2,500 troops strong, and augments Latvia’s own army of 7,400 troops. The 200 Danish forces in Estonia are part of a 2,000 strong, UK-led NATO brigade, while Estonia itself has 7,000 troops. Lithuania has a stronger military presence, as – like Poland – it borders on the Russian exclave Kaliningrad: 16,800 Lithuanian troops are supported by 4,000 Germany-led NATO soldiers. Fighter jets of the NATO nations are patrolling the skies of the Baltic states, as the countries themselves have no combat air power to deal with any air threat.

Poland has on paper, a military strength of 120,000 troops, and got support of 10,500 mainly US and British forces, including two batteries of sophisticated US Patriot air-defence missile systems.

On 24 March Lithuania called on other NATO members to help reinforce the Suwalki Gap, the border area with Poland of about 100 kilometres (62 mi.) wide which is a weak spot in the defence of the Baltic States. In theory a Russian attack from the Kaliningrad exclave and Belarus could take the vital land link out, making reinforcing the Baltic states virtually impossible, as it is expected that Russian S-400 air-to-air missiles and Russian naval and naval air forces might succeed in blocking NATO’s attempt to reinforce Estonia, Latvia and Lithuania by sea and air.

Sweden Has Not Lost
Its Neutrality