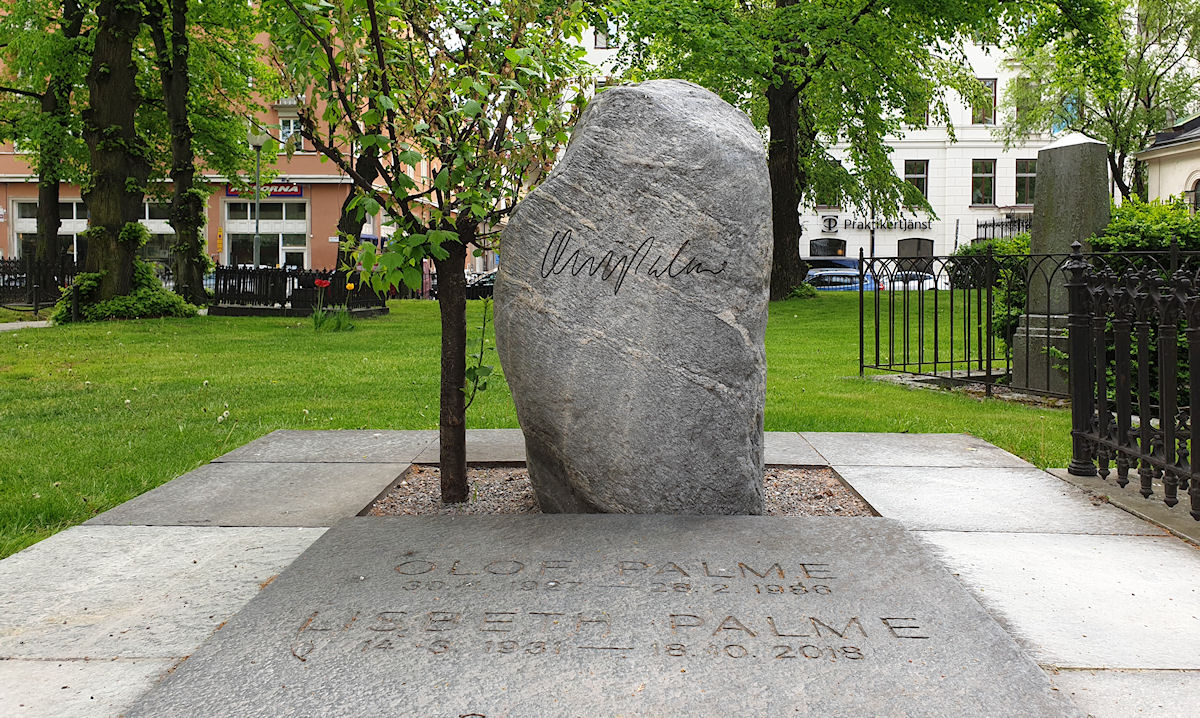 UPDATED 10 JUNE 2020, 09:32 / 12:07 | Swedish Prime Minister Olof Palme was killed by a single .357 Magnum bullet from a revolver when he left a cinema in central Stockholm on 28 February 1986. But who killed him has been a mystery for 34 years. No longer, as the Swedish prosecutor and special Palme Group of the police announced on 10 June 2020 that the likely killer is Stig Engström, aka Skandiamannen.

If you understand Dutch listen again to VRT Radio 1, De Ochtend,
of 10 June 2020 around 08:30. The soundbite you’ll find underneath the article here at radio1.be.

The murder of Olof Palme is a national trauma for Sweden. Despite 241 metres of book closets of paper archives of the investigation – it would take about 9 years for a trained legal expert to read them all, the Swedish police says – and another 11 metres of recordings, 10,000 police interrogations, 22 direct witnesses and 134 people who said they committed the crime, the real killer has been “on the loose” all the time – and can never be charged since he is no longer alive. But, the country needed clarification, to move on from its past. The Palmegruppen – the changing team of state detectives that has been on the case ever since the murder – still received 10 e-mails and letters a week of people presenting their theories. That’s how much the case has kept Swedes confused for such a long time.

The Murder of Olof Palme

Prime Minister Olof Palme was shot at 23:21 on 28 February 1986 on the corner of Sveavägen and Tunnelgatan, in the very centre of Stockholm’s inner city, after leaving the Grand cinema with his wife Lisbeth, their son and their son’s girlfriend. The assailant came up behind them, fired one shot that killed the statesman, a second injured his wife Lisbeth.

The Weapon that Killed Palme

The murder was committed with a .357 Magnum bullet fired from a revolver. The police has narrowed the possible weapons down to seven brands: Smith & Wesson, Ruger, Taurus, Kassnar, Escordin, Llama, Ruby. Which it really was, we might never know.

According to the Swedish nationwide daily Aftonbladet the murder weapon was found after three decades. But the police and prosecutor denied this on 10 June. The bullet that killed Olof Palme and the one wounding his wife were in such bad condition that it could not even be excluded that they were fired from different guns, the leader of the police investigation said. 788 weapons were test-fired, but the murder weapon might never be found, at least not “with today’s technical development” the prosecutor said.

My second radio talk of 10 June on this item was solely focused on the suspected killer of Olof Palme. Listen again to VRT Radio 1, Nieuwe Feiten,
of 10 June 2020, 34 minutes into the broadcast. Check Radioplus.be

A graphical designer who worked for pension fund Skandia nearby the place of the crime. Stig Engström, aka Skandiamannen, was 52 years at the time of the crime and back then presented himself to the police as a witness. According to the prosecutor on 10 June, Engström was an alcoholic and had problems making both ends meet.

Swedish journalists that looked into this suspect in 2018 found out Engström was openly critical to Palme and had access to a room at home filled with weapons, including one that matched the .357 calibre. But technical scanning of the weapon excluded it as the murder weaopn. None of the witnesses of the crime have seen a weapon in Stig Engström’s hands.

He left his office at Sveavägen 44, close to the Grand cinema where the Palmes went, at 23:19 the night of the murder. This has been proved by a electronic card clocking system that his company used. He worked extra that night, as he had planned to go on a holiday trip with his wife the day after. According to the prosecutor he had planned to take the metro at 23:48, but the prosecutor said on 10 June that it is not clear which road he walked towards the metro, or that he wanted to take the bus instead. All we know he had a window of about half an hour between leaving work.

Stig Engström himself said, according to the statements recorded by the police, that he hadn’t noticed the Palme couple when he left his work, but that he saw them when the shots were fired. He said he approached the lying Olof Palme when other people were providing first aid. Engström also pointed out a suspect: a man with a blue jacket. Engström said he spoke to Lisbeth Palme and to a police officer. Engström later changed some of his statement or details of his statements, but none proved right. No one has seen him on the scene of the crime and Lisbeth Palme or police officers have not seen Engström at the crime scene at all.

The Unusual Other Suspects

The Palmegruppen has had six other suspects suspects. One was initially convicted of the murder.

In 1989 local criminal Christer Pettersson was found guilty of the murder, being pointed out by Lisbeth Palme as the attacker, but the Court of Appeal (Svea Hovrätt) freed Pettersson. The prosecutor emphasized on 10 June that Pettersson was the man she saw when she turned around after the shot at Olof Palme was fired, but that Lisbeth did not In 1997 the case was officially closed and Pettersson died in 2004, at age 57.

Christer A., aka Christer Pettersson double, was a third main suspect. He lived only 15 minutes walk from the spot where Palme was killed, he owned a Smith & Wesson .357 revolver and he hated Palme. Police never found the gun however, and when they knocked on his door in 2008 he shot himself with anther gun and died.

Viktor Gunnarsson, commonly known as the suspect “33 Year Old” (33-åringen) was a gun loving Palme hater. But he had a working alibi and his clothes didn’t match Lisbeth Palme’s testimony. The 33 Year Old was in 1993 murdered by a ex-police officer in North Carolina, United States.

Olof Palme’s government classified the Kurdish separatist organisation PKK as a terror organisation. The police interviewed at least 20 Kurdish in 1987, but didn’t follow up on it.

The South African security services were another suspect, as Olof Palme was strong critic of the Apartheid suppression policy of the black majority by the then solely white minority government of South Africa.

The Palmegruppen even looked into the option that one of his own – a Swedish police officer or a group of radical police officers, either from the regular police, from the national security police (Säpo) – was behind the murder of the prime minister. Some sources have questioned Palme to be a spy or pawn for the then Soviet Union, as he was quite liberal with his opinions towards the then enemy of the west. His left views, strong criticism against “American imperialism” was not very popular among some. But no police man or woman was never close to be accused of the murder, neither was anybody in the Swedish security police.

The End of Confusion?

After an investigation of 34 years, the murder case of Swedish prime minister Olof Palme will now be closed. The police and prosecutor have pointed out the likely killer, but since he is dead nothing can be done anymore. The question that has kept Sweden confused for decades, Who killed Olof Palme?, has been answered. But without real technical evidence, a guilty statement or a conviction.

Another question that remains is why police in 1986 did not take Stig Engström in custody as a likely suspect. The public prosecutor during the 10 June press conference: “If the current (special investigative) Palmegruppen would have existed (with the current members) 34 years ago, there would have been sufficient suspicion to arrest Stig Engström for the murder of Olof Palme, maybe found the murder weapon, do a house search, secure DNA and secure more evidence.” | © 2020 Marcel Burger / nordicreporter.com (text and photo)

Featured image: the grave of Olof and Lisbeth Palme (died 2018) at Adolf Fredrik Cemetery in Stockholm, a few hundred metres from where Olof Palme was killed in 1986.