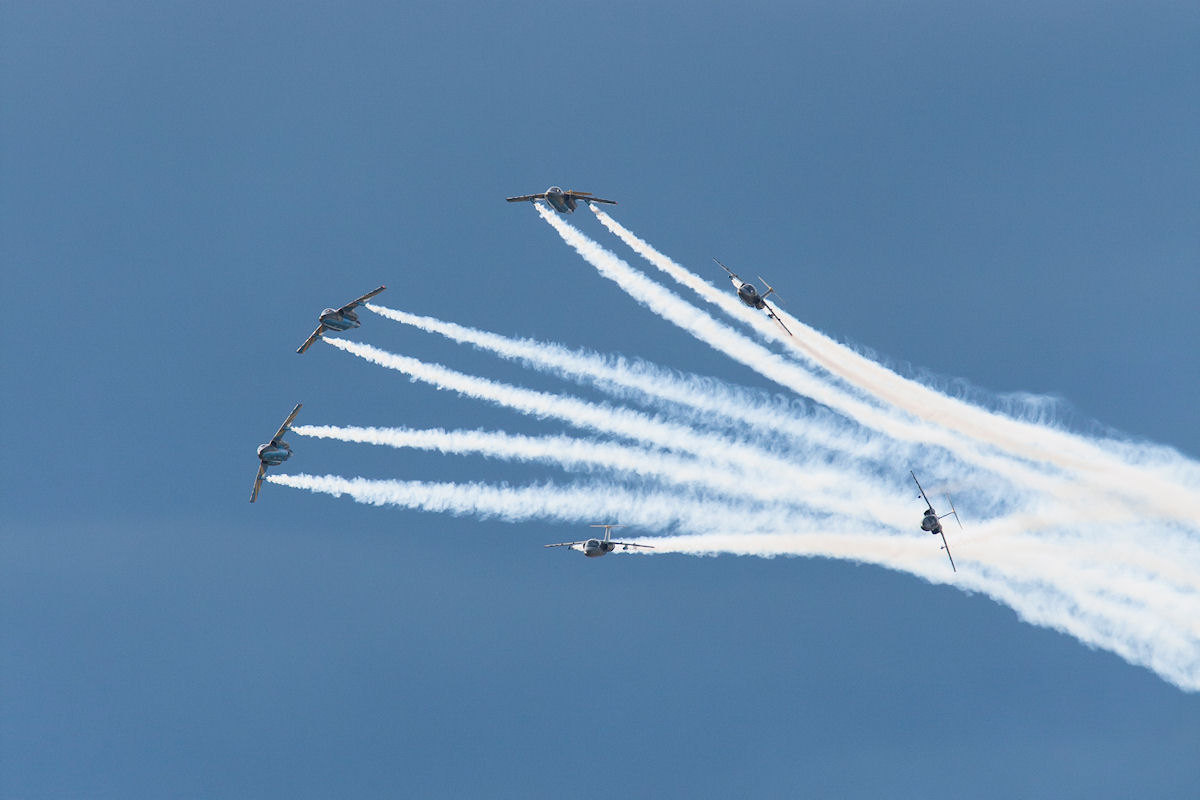 There are not many countries that can put their entire fighter jet history to its present combat aircraft up in one flying formation. Well, Sweden can. Proud of its own aviation industry led by SAAB, Sweden is able to show its long-time winged technical achievements thanks to a support of the country’s air force, its aviation museums but most of all, a group of airplane enthousiasts.

Seventy years of one country’s jet plane production in a flying formation … it is a rare sight which not many of the world’s nations can achieve. But Sweden can. It is much the work of the Swedish Air Force Historic Flight that has put long retired aircraft back into the air, years after their last flight.

The SwAFHF – as the acronym goes – is an association of non-payed enthousiasts, often former and retired employees of the country’s air force including some of the top fighter jocks and most brilliant technicians and engineers. They once guarded Swedish airspace against a Russian invasion – a task that has not changed ever since the SAAB J 29 Flygande Tunnan (Flying Barrel) was introduced into service in the 1950s. More than 660 “barrels” were build, but the only airworthy version left is making its appearance on air shows every year.

The Tunnan put SAAB on the map as an aircraft manufacturer to respect. Being the first Swedish jet aircraft ever the J 29 could match or outclass its foreign counterparts like the North American F-86 Sabre and the Soviet Mikoyan-Gurevich MiG-15 “Fagot”. The J 29 was a giant leap forward to propeller planes like the SAAB 91 Safir from 1945.

Based in Linköping in Southern Sweden SAAB kept making history by producing combat aircraft that impressed in both looks as well as performance. Take the J 35 Draken that – at certain angles – looks like a fast alien space ship, or the big AJS 37 Viggen that was the world’s first massively produced plane with a canard design (main delta wing on the back and smaller front wing).

The current front-line jet of the Swedish Air Force, the SAAB JAS 39 Gripen, was the world’s first 5th generation combat jet. The Gripen needs only a very small maintenance crew of four to keep it flying and its operation costs are very low compared to similar aircraft built by other nations.

Being proud of its heritage the Swedish Air Force fields a display team with yet another production from home, the SK 60 training aircraft. After an absence for years Team 60 was back in the air during the 25 August 2018 Uppsala Military Airshow, at which most of these photos were taken. While the SAAB SK60 trainers are in the autumn of their career, flying the national symbol Three Crowns they still make many Swedes proud. |